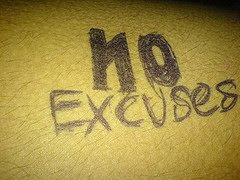 Definition (Noun): Psychological disorder or a tendency found in a number of human beings resulting from the need to defer responsibility to or blame anyone or anything other than one’s own self. This disorder is usually accompanied by rationalization disorder.
Found in: Most homo sapiens (human beings)
Symptoms: This is disease of the mind in which the usual response to a situation is if only I had better education, I don’t have time, if only I had rich parents, if only I was beautiful/slim/cool, if only I had a big brother/sister, if only I had a better paying job, if only I was healthier, if only I was not fat, if only… if only … and it goes on and on.
How to spot a patient: Look around yourself, talk to people and they will tell you how they would achieve this ‘only if’ …. You will find millions of them (can also find in front of your mirror!!)
Cure: Once the patient KNOWS that he/she has this disease then its easier to cure.
But alas, people DON’T THINK they have excusitis. They think the actual problem is with the things around them, in their circumstances. And they rationalize their every action or inaction, no matter how stupid that is.
I have posted the ‘cure’ for this common disease on this blog called Home Made Cure For Excusitis, check it out.
Meanwhile, some excellent quotes on excusitis:
“Ninety-nine percent of the failures come from people who have the habit of making excuses.”
George Washington Carver
“People are always blaming their circumstances for what they are. I don’t believe in circumstances.
The people who get on in this world are the people who get up and look for the circumstances they want, and, if they can’t find them, make them.” 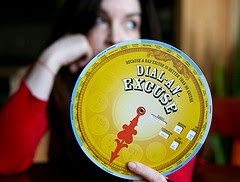 How to Control Your Destiny (Apni Qismat Ko Sanwarein – Urdu)

Are you new here?

Know More About Me...

Thanks for dropping by. In this space Nuruddin shares what he is learning from life.
Power of Thought will motivate you, dare you to dream & share life hacks which can make life better.
Nuruddin loves to talk about dreams, gratitude, happiness, forgiveness, success - or simply about life. If we delve deeply, it always boil down to our thoughts, how one thinks, which is what matters the most in our lives.
If you like what you watch and read here, we urge you to please share with people who may benefit.