Charisma or The Courage to be Different? 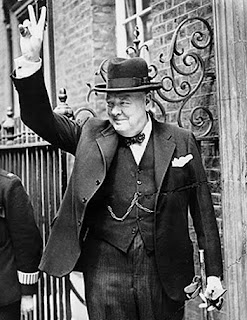 Winston Churchill endlessly smoked huge cigars. He used to sleep all mornings and then worked throughout the nights.
Dictated crucial war correspondence to his secretary while lying in the bath.
He drank more champagne in a week than most people do in a lifetime…
This also provoked the rebuke from fellow MP Bessie Braddock, “Mr. Churchill, you are drunk.” To which he famously replied: “Indeed, madam, and you are ugly, but tomorrow I shall be sober!”

While reading an awesome book, “Life’s a Pitch” by Stephen Bayley & Roger Mavity, I came across a chapter called ‘Charisma, or, The Courage to Be Different’. Most of what is written above has been inspired by the book only.

The argument boiled down to the following two traits of people with charisma:

Aren’t these the very qualities that we’d rather NOT have in us?

We’d rather ‘gel’ with the crown rather than be different.
Or do whatever is expected of us than try and do something outlandish…
Or become someone who everyone forgets than to be someone remarkable… This reminds of me of another great book “Linchpin” by a remarkable man Seth Godin.

Coming back to charisma, the book goes on explaining why Che Guevara and Bill Clinton had charisma..
Whereas, George Bush (both Junior & Senior) never had it…

Why Picasso and Dali had it and others didn’t…

Why Churchill had it but his replacement Attlee, who was far more intelligent, didn’t…

And do we want to talk about the second trait? Enjoying yourself? This is something most of us hardly do… We brood over our problems much more than we should & while we do that, we forget to be happy, enjoy ourselves…Living in the past or worrying about the future. Enough has been said about this. Even on this blog! Search ‘happiness’ and you will know.

When you are happy, you start becoming successful. Not the other way round which we popularly believe.

If you want to read more about the book, I’d suggest you read this review first.

I think it’s a great book and a must read for anyone who has anything to do with interacting with people a.k.a. living…!

Have a charismatic life!

Dare to be different!

Don’t Take Life Seriously by The Author of 3 Idiots

A Stranger in My House…

Are you new here?

Know More About Me...

Thanks for dropping by. In this space Nuruddin shares what he is learning from life.
Power of Thought will motivate you, dare you to dream & share life hacks which can make life better.
Nuruddin loves to talk about dreams, gratitude, happiness, forgiveness, success - or simply about life. If we delve deeply, it always boil down to our thoughts, how one thinks, which is what matters the most in our lives.
If you like what you watch and read here, we urge you to please share with people who may benefit.